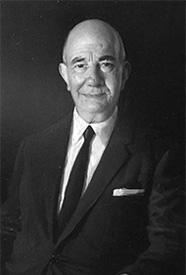 The mysterious history of the Campisi family in America begins back in 1904, when my great-grandparents, Carlo “Papa” and Antonia Campisi, immigrated from Sicily to New Orleans. They settled in Dallas thanks to a telegram from a cousin who wrote of a grocery store for sale for $800. Soon after, Papa was in the grocery business at the corner of Hall Street and Central Expressway (formerly the Central tracks). In an apartment above the store, my great-grandparents had six kids (four girls and two boys), who helped by working and translating in the store.
​ 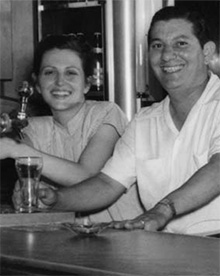 In 1946, with the end of World War II, Papa purchased a bar with a small kitchen in the back at the corner of Knox and McKinney called the Idle Hour. A cousin visiting from New York suggested they serve “Pizza Pies” which were so popular in New York. So, Papa gathered his family in the kitchen to create Dallas’ first pizza, as well as Texas’ first pizzeria. My grandfather Joe and my great uncle Sam were always on hand promoting their pizza pies to all their patrons.
​
We moved to our Mockingbird Lane location in 1950 to take over the previous “Egyptian Lounge.” At the time, there was not enough money to buy a whole new neon sign, so the original Egyptian sign was changed by removing the word “Lounge” and adding the word “Restaurant.” After Papa and Uncle Sam passed away, and the girls were busy raising their families, my grandfather Joe continued the entrepreneurial spirit of his father by continuing to grow the family business.
​

The American Dream that brought the Campisi family to this country has become a reality.

In 1971, Campisi’s was granted one of the first liquor licenses in the state of Texas since prohibition. Joe continued to serve his friends, politicians, and sports figures, and even became a local celebrity himself. My uncle Corky ran the Mockingbird Lane location through the next four decades and trained the next generation. In 1993, I opened the first satellite store at Coit and Campbell. Since then, I have expanded Campisi’s to multiple locations throughout the Dallas metroplex.

​
The “American Dream” that brought the Campisi family to America has become a reality. Thanks to you, our loyal patrons, numerous local and national awards have been bestowed upon us over the years. The awards include Best Pizza, Best Italian, and Bon Appetit magazine’s One of the Best Pizzerias in America. We feel honored to be the oldest Italian restaurant in Texas. And, with the third and fourth generation of Campisi children now carrying on the traditions, we are proud to enter our eighth decade of service to the metroplex.
​

My grandfather Joe, who raised me as his son, taught me a lesson in business. He said, “Baby, Campisi’s was built on handshakes and hellos.” And that’s what we’re still doing today.

In November of 1963, President John F. Kennedy traveled to Dallas to make peace between liberals  and conservatives in the Democratic Party who were fighting politically among themselves. The route of the presidential motorcade from Dallas Love Field to the Dallas Trade Mart was determined on November 18 and announced to the public just a few days before he arrived.

Jack Ruby, a friend to the Campisi family and regular at the restaurant, ate dinner at the Egyptian on the night of November 21. He was a man known for his alleged involvement in the illegal underground activity of Dallas.

The next day, November 22, as the presidential motorcade drove through Dealey Plaza in open air limousines, President Kennedy was assassinated, shocking Dallas and the entire nation.

Just two days later, as the Dallas police were escorting Lee Harvey Oswald from the police basement to an armored car to take him to a nearby county jail, Jack Ruby jumped from a crowd of reporters and fired a single round from a .38 revolver into Oswald’s stomach, ultimately ending his life.

Jack Ruby requested specifically that the Campisis come visit him in jail. On November 30, 1963, Joe Campisi and his wife visited with Jack Ruby for ten minutes. About what? Who knows?

© 2023 Campisi's Restaurants. All Rights Reserved. Website by Frozen Fire.
To make a reservation, please call your nearest location. Thank you!